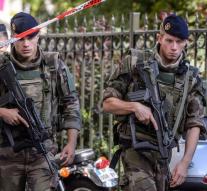 paris - The French police shot a man on Wednesday afternoon on a highway in northern France. According to the French transmitter BFM TV, police were also involved in the arrest.

It is still unclear whether there is a connection with the attack on a group of French soldiers in Paris earlier in the day. According to AP, it is the attacker who has been arrested. That is what the press agency says on the basis of French authorities.

The incident in Paris struck six soldiers. A man drove into the soldiers and then fled.