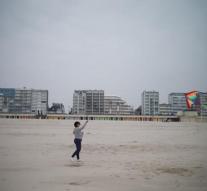 le touquet - The northern French resort of Le Touquet-Paris-Plage was largely closed for the purpose of cleaning explosives from the Second World War on Tuesday. Everyone must have left the north of the place or stay until noon.

Six explosives are made harmless and removed. According to French media, it is a difficult operation. If it has not been completed in the afternoon, the cleanup work will resume on Wednesday morning and closes the resort again.

The city, 180 kilometers north of Paris, suffered greatly during World War II when there were 40,000 German soldiers. Nazi Germany also feared an invasion of allies. When they released the place in 1944, they found more than 100,000 mines in the place itself and in the surrounding dunes. In no French town so many mines were laid down.