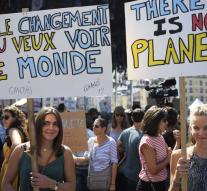 paris - Tens of thousands of French people have taken to the streets in large cities on Saturday to demand measures against climate change. They gave heart to former Minister of the Environment, Nicolas Hulot, among other things. He recently stepped out of frustration about the failing government policy in this area.

According to police, there were 18,500 people in the center of Paris. The organization of the 'Mars for Climate' in the capital, however, spoke of 50,000 participants. They carried banners and signs with, among other things, the text 'Planet in Danger' and 'If not you, who?'

There were manifestations in 47 cities, including Marseille, Strasbourg and Toulouse, with an estimated 115,000 demonstrators in all. In the Libération newspaper, 700 French scientists called on the government to take action on Saturday. 'The symptoms of climate change are constantly accumulating. Yet nothing substantial is being done against global warming. '