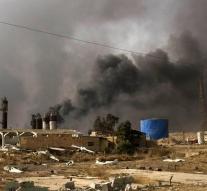 - France prepares to support an offensive by the Iraqi army against the terrorist group Islamic State in Mosul. Artillery pieces to be shipped to Iraq and also the aircraft carrier Charles de Gaulle is being prepared, said Defense Minister Jean-Yves Le Drian Tuesday.

Around Mosul, 400 kilometers north of Baghdad, the Iraqi army has involved positions. It is expected that this autumn begins an offensive IS recapture the country's second city. From the Grand Mosque in Mosul called IS leader Abu Bakr al-Baghdadi in 2014 in parts of Iraq and Syria from a caliphate.

France, the first country joined the US air strikes in Iraq, air strikes have against IS in Iraq and Syria intensified after several terrorist attacks in France. French special forces in both countries and France also supplies weapons to rebels in Syria.