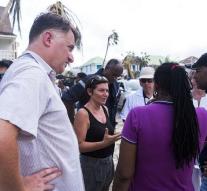 saint - The French minister of overseas territories, Annick Girardin, visited the island of St. Maarten, struck by Hurricane Irma. Girardin said to French media during an inspection of the damage in the northeast of the island that she was shocked. She said 'to hear about the amount of damage, but seeing it with her own eyes is very shocking.'

Girardin also spoke about looting. 'We are going to focus on safety and then follow the reconstruction,' said the 53-year-old government woman.

The island has been partly French and partly Dutch since 1648. Nearly 78,000 people live, of which almost 37,000 are in French Saint Martin.