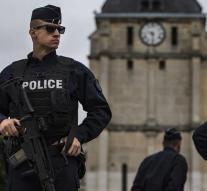 - Some French media no images of terrorists want to show more. The boss at the newspaper Le Monde, Jerome Hamel, made Wednesday in a newspaper commentary known that the newspaper does not show propaganda of terrorist groups or images of suicide bombers terrorist movements more. Le Monde would thwart that offenders be honored after their deed.

The chef at the French news BFMTV, Hervé Béroud, made Tuesday to stop all familiar with showing bombers.