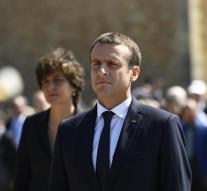 paris - Civil servants and parliamentarians in France may not hire any close relatives as an employee. They must give openness about the costs they incur and the public support for political parties becomes more transparent. These are parts of a new law adopted by the French First and Second Chamber on Wednesday and Thursday.

The new law is the first of a package of measures that must eliminate friendship politics and interests in French politics. That is one of Emmanuel Macron's main election promises.

Macron had his election as president earlier this year due to publications in French media about the conservative presidential candidate François Fillon who had his wife as an assistant. Fillon sank quickly in the polls and lost in the first round of presidential elections in April of Macron and Marine Le Pen.