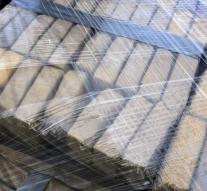 - The French authorities at the port of Dunkirk a container with 508 kilograms of cocaine were seized. The channel France 3 reported Friday that the drugs were found on a ship that was coming from Suriname to France hazards.

The cocaine would have a street value of approximately 15 million. Employees of Octris, French service against illegal drug trafficking, cocaine found during checking of containers in which rice would have. The cocaine was hidden in sports bags.

According to French media no arrests have yet been made.