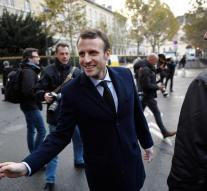 - Former French Minister of Economic Affairs, Emmanuel Macron, will announce Wednesday that he participates in the battle for the presidency. That French media reported. The expectation was that he would be a candidate and his decision to campaign drive both left and right candidates in the wheels.

The 38-year-old former banker took earlier this year resigned as minister and started his own political movement, En Marche (Forward). Although he was a minister in the Socialist government of President Francois Hollande Macron is not a member of the Socialist Party. However, he is a popular politician. Macron focuses on the political center, where former Prime Minister Alain Juppe targets. In the polls Juppé is leading.

The elections in April and May.