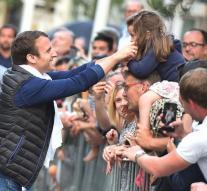 paris - Almost one month after Emmanuel Macron has been appointed president of France, the French in two rounds elect a new parliament. Sunday is the first round. In every district where nobody gets more than half of the votes, 18 June will take another round. Any candidate who wins at least 12.5 percent of the votes on Sunday may participate again on 18 June and then the candidate wins the most votes.

Macron wants to pull the country economically. He wants to get rid of many of his old-age relationships between social partners. In order to pursue effective economic policy, he needs a majority in the French Lower House of 577 seats. Macrons set in 2016 La République and Marche (LRM) has no seat yet.