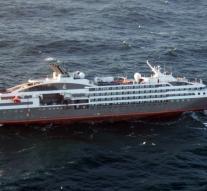 stanley - A French cruise ship came to the Falkland Islands in the South Atlantic in trouble by fire in the engine room. All 347 passengers were evacuated in an operation in which the British Navy came to the rescue, as British media reported Thursday.

The ship was now stable.