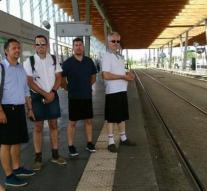 nantes - Bus drivers in French Nantes go massively in a skirt for their work this week. This to protest against the ban on shorts imposed by their boss. Due to the tropical temperatures it is impossible for the drivers to wear long pants.

According to the rules, male drivers are not allowed to wear shorts, but there is nothing about skirts. The men find it discriminatory that women are allowed to work with their bare legs. Furthermore, the buses would not have good air conditioning.

Through the protest the men argue that the management is adjusting the rules. They hope that at a temperature of 30 degrees or above they can wear a short pants during their work. The trade union is behind this ludicrous protest.