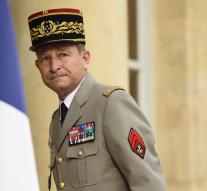 paris - French army leader Pierre de Villiers has filed his resignation on Wednesday on the cuts of cuts President Emmanuel Macron has in defense. French media reported that the General had understood from Macron that defense would be avoided this year in the budget. He expressed his anger last week against parliamentarians that it is now being reduced. Macron would not have kept his word.

According to French media, Macron was angry with the loose general who announced that the planned cuts would not be dealt with. The armed forces must reduce 850 million euros. De Villiers stated Wednesday that this is not possible. He gets up because he says, 'No longer can guarantee the robust defense force necessary to protect France and the French today and tomorrow.'