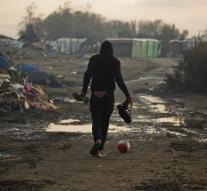 - France accuses Britain of failing accountability at more than 100 minor laggards in Calais. Britain had promised to take children from the refugee camp in Calais after the eviction last week, but teens remain behind. Writes The Guardian.

It has become a yes-no game on a high political level. The French Interior Minister, Bernard Cazeneuve took Friday off to his British counterpart Amber Rudd, after her rebuke to the unsafe situation for disadvantaged children in the camp. Cazeneuve: 'The French ministers hope (to) the United Kingdom will soon take responsibility for these minors, who are hoping to get into the UK. This is the best way to give them protection. 'There is talk of a diplomatic standoff between the two countries on this issue.

The United Kingdom has received between 240 and 300 children, but a group of 100 young teenagers between 11 and 17 years old live for two days on the ruwines of the makeshift refugee camp. Theirs an unknown fate.