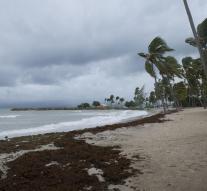 paris - French soldiers and firefighters gather in Guadeloupe. This island becomes the base for help with the islands affected by hurricane Irma.

Auxiliaries gather in the city of Pointe-a-Pitre. From there it's a half hour to Saint Maarten. The French first want to map the situation on that island and the severely affected Saint Bartholomew.

The air bridge must be installed today. There is little left from Princess Juliana Airport International Airport on the Dutch part, but the Grand-Case Regional Airport in France is less affected than expected. There can in any case already land helicopters.