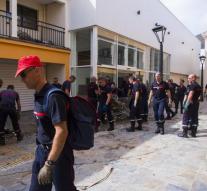 paris - While criticizing Dutch aid for Sint Maarten, the French rescue services do not contain an inverted word. On the affected islands of Saint Bartholomew and the French part of Saint Maarten, there are a thousand soldiers, firemen and agents active from Saturday.

The French have used a great deal of staff and equipment to put an end to the islands affected by Hurricane Irma, both French overseas territories. From the city of Pointe-a-Pitre on Guadeloupe, flying half an hour from Sint Maarten, the help started on Thursday morning. Yesterday afternoon sea transport was discontinued, because with the arrival of Hurricane José the water became unpredictable. Aircraft could still be used.

Friday there were 190 gendarmes, 60 soldiers, 80 agents and 115 security people on the spot, with another 455 man reinforcement in progress. Before Hurricane José is doing the island, expected on Saturday night on Sunday, there must be a total of a thousand emergency workers. There are six helicopters and five planes active, next week a ship leaves with goods and materials for loading houses and roads.

Premier Edouard Philippe spoke of a 'challenge in logistics and solidarity'. 'Currently, mobilization is extraordinary and it is also necessary in view of the seriousness of the situation. 'Minister of Overseas Territories Annick Girardin was already on Thursday. On the French side nine deaths have fallen, seven people are still missing.

At diplomatic level there is a lot of consultation between France and the Netherlands. The Dutch ambassador to Paris is present at the ministerial crisis consultation with Prime Minister Philippe, the French ambassador to the Netherlands at the meetings in The Hague. Also at the headquarters in Guadeloupe and Curacao and on frigates are diplomats and soldiers exchanged. President Emmanuel Macron and Prime Minister Mark Rutte have telephone contact with Hurricane Irma's consequences.