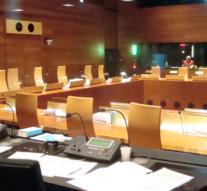 luxembourg - The decision by the European Union to freeze the financial assets of the Tamil Tigers and Hamas is not lawful. That suggested the Advocate General of the European Court of Justice on Thursday. According to many it was a decision based on media reports and not sufficiently investigating the competent authorities.

In 2014, a lower authority of the court in Luxembourg ruled already that the decision by the Sri Lankan and Palestinian resistance movements, which are on the EU terror list, was not right. The EU subsequently appealed.

Advocate General Eleanor Sharpston advises the court to attach and destroy the measures against Hamas and the Tamil Tigers the previous judgment. The opinion is not binding, but in most cases by the judges of the court.

The Dutch Council of State said in April 2014 already doubtful whether the EU the Tamil Tigers has rightly placed on the EU terrorism list and asked about advice to the European Court. The highest Dutch administrative court did so in response to a case about whether the Netherlands assets of four men who tires would have with the Tamil Tigers, had frozen up. That measure was partly based on the decision of the EU.