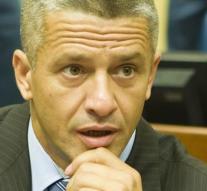 sarajevo - The former Commander of the Bosnian Muslims in Srebrenica, Naser Orić, has been released in Bosnia from war crimes against Serbs. Persecutors of Serbian victims protested the room.

The judge ruled Monday that the former commander and co-defendant did not commit themselves to 'breaking parts of the Geneva Conventions. 'Bosnian Serbs had blamed the duo for the murder of three prisoners of war.

Bosnian Muslims then applauded Orić when a free man left the room. Serbs responded just outrageously. 'This is a scandal. Everyone thought he would be punished, 'said a woman who claimed that the men of Orić had killed six of her relatives.

Many Bosnian Muslims see Orić as a hero because of his defense of Srebrenica. Bosnian-Serbian troops ran into the city in 1995, after which many thousands of Muslims were killed. The presence of Dutch UN military could not prevent the massacre.