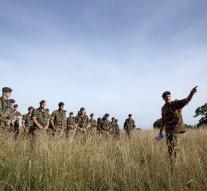 arnhem - Three soldiers suspected of throwing buckets of water with chlorine during an initiation ritual in Havelte were released on Monday. During the ungroup in July 2015, a person broke out.

The military chamber of the court in Arnhem is likely to have been exploited on the barracks with buckets of chlorine water, but does not think that the debt can be deposited with the three suspects.

Jan B., 24-year-old Louis de B. and 28-year-old Willem B. did not know any chlorine that might have been added to the water, they said.

At the inauguration, about thirty newcomers were watered with buckets of water. It is common to add soap to the water in the summer. In this case, potentially several buckets contained chlorine tablets in the water. According to the military chamber, it has not been proven that this triple had a role.