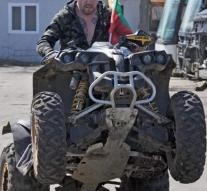 - The self-appointed refugee hunter Dinko Valev (29) from Bulgaria has been released from the illegal detention of refugees. According to Bulgarian media, the court in the city of Burgas ruled that there was insufficient evidence against the suspect. This was due to the fact that abducted Afghans had identified the man on a photo only.

The case caused a lot of dust to rise both inside and outside the eastern European country. Amateur images of Afghans tied by civilians left the world last year. The authorities ruled that the refugee hunters had violated the law.

However, a conviction of one of the alleged refugee hunters remained. The abducted migrants had not explicitly confirmed that the suspect had bound them. They also had the man appointed only in photographs, and not personally, as a perpetrator.