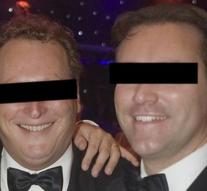 He was in great need of money due to the construction of a thatched villa of 1.3 million euros in Scherpenzeel. He fraud led by American Express, ABN Amro and cosmetics company Inglot. Wednesday launched the lawsuit against him and former treasurer of the cancer gala, which agreed to a 'loan' from the gala to him.

Follow here the live coverage of the trial of the two men, by reporter Bart Mos from the courtroom in Amsterdam.