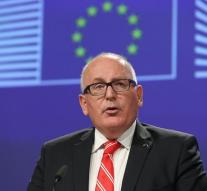 brussels - Frans Timmermans honors the reputation of Dutch economy. For work visits to Apeldoorn, Cologne or Groningen, the Vice-President of the European Commission does not declare hotels, while expenditure of 8.66 and 14.65 euros for a meal does not really pave the way.

That can be said of spending statements made public by the Spanish Access Info Europe organization on Wednesday. That prompted the expense of all 28 EU commissioners by 2016. The commission paid the first two months when the Netherlands held the six-monthly EU presidency. During that period, Timmermans had a lot in their own country. The Turkish capital Ankara was its only distant trip, and included flights, hotels and meals 1664 euros.

According to the Belgian weekly magazine Knack, which analyzed the documents, the commission issued a total of 492 in January and February 2016. 249 euro paid to 261 work visits in 26 EU countries and 23 abroad. Per commissioner, that was an average of 17,580 euros. Timmermans sat down at 6.925 euros, foreign manager Federica Mogherini with 96,000 euros thick above.