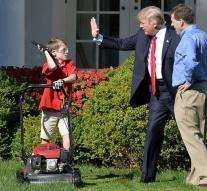 washington - A dream came true for the 11-year-old Frank Giaccio. The American Fall Church boy was a day-long (assistant) gardener of the White House. For a while, Frank wrote a letter to President Donald Trump in which he offered his services.

In the letter, the boy wrote that he had started his own business and that he kept his neighbors' gardens fine with his green fingers. He would also like to do that for the president, who admits Frank for his business background.

On Friday, Frank was allowed to mow the grass in the Rose Garden, the presidential garden. According to a spokesman, Donald Trump said that Frank is 'well-being'.