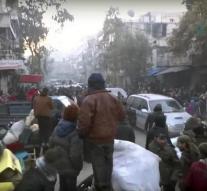 new york - France wants international observers to the Syrian city of Aleppo there to monitor the evacuation of civilians and rebels. That said French UN Ambassador Francois Delattre Thursday.

'It is crucial that under the UN flag international observers see the situation,' said Delattre. France has asked for an emergency session of the UN Security Council. Which will possibly Friday.

Thursday in the besieged eastern Aleppo evacuation underway of thousands of civilians and rebels.

Britain is also extremely concerned about the state of affairs in Aleppo. Foreign Minister Boris Johnson, the ambassadors of Russia and Iran, the main allies of Syria, called on the carpet. They have failed to comply with international humanitarian law according to Johnson. According to Johnson, they have 'failed to allow the delivery of humanitarian aid to civilians in the months of eastern Aleppo was besieged. '

'After all the suffering they have caused among the population of eastern Aleppo, Iran and Russia can not expect praise because at the last moment to allow some people to escape,' said the British minister.