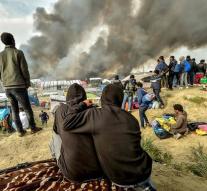 - After clearing the refugee camp in Calais, France will not allow another makeshift camp anymore. That said, the French president Hollande Saturday.

He announced that will be dismantled a camp in the northeast of Paris. 'We will do the same as in Calais and Paris evacuate the camp. 'According to Hollande were immigrants in the French capital does not come from Paris, but they were part of a new wave of refugees from Libya.

France began on Monday with the dismantling and evacuation of the camp in Calais. The camp was empty Thursday. According Hollande are 5,000 people last week accommodated in regular childcare elsewhere in France. For some 1,500 minors unaccompanied asylum seekers seek the authorities a new place.