Home / World / France sets the number of deaths down 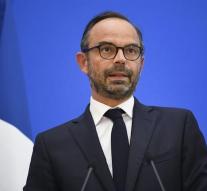 paris - The French authorities have downsized the number of victims on the French part of Saint Maarten.

Premier Édouard Philippe reported at a press conference that there were four deaths due to Hurricane Irma. Previously, the authorities still spoke of eight deaths on Saint Martin.

According to the Prime Minister, there were about fifty injured, two of whom are seriously injured and at risk of death. The material damage is considerable. 'Certainly 95 percent of homes are damaged and 60 percent are uninhabitable. The electricity has been cut off and there is a lack of drinking water and fuel. '

The Prime Minister confirmed that the port and airport are operational for aid groups. The surgery rooms can also be used in the island's hospital.

Also in Barbuda (1), the British island of Anguilla (1) and Puerto Rico (3) people came to life.