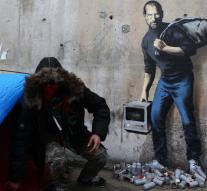 - The French city of Calais is going to protect a number of murals of the famous graffiti artist Banksy with (plexi) glass plates. That the city administration reported Saturday. Banksy has visited the city in secret and left at various places works of art, so Friday was discovered.

One painting is placed in the 'Jungle', the tent camp where there are thousands of illegal refugees. The painting depicts Apple founder Steve Jobs with a shoulder bag and an old Apple computer under his arm, and carries the subtitle "the son of a Syrian immigrant," which Jobs was indeed.

Elsewhere in Calais is the text as ' Maybe this whole situation will sort itself out " (Perhaps this situation will resolve itself). There you can see a mural of a group of refugees on a raft wrakkig, subtitled "We are not all in the same boat." The latest work shows a child with a briefcase and a pair of binoculars where a vulture sitting on.

Banksy is known for his fierce criticism of society.