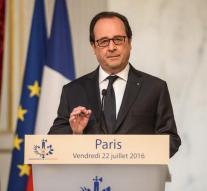 - France wants to put the Iraqi army artillery available for the fight against the terrorist organization Islamic State. That President Francois Hollande said Friday after a meeting of his security cabinet. The weapons must be on site in August, he said.

Hollande announced last week after the attack in Nice though to step up aid to the Iraqi forces. The nature of the commitment does not change.,, We support our allies in Iraq and Syria, but we do not put ground troops in, '' he said.

France has been helping Iraq with military instructors and advisers. In addition, the French Air Force bombed positions of IS. From late September France wants back the aircraft carrier Charles de Gaulle betting against the jihadists.