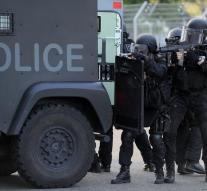 - France is a National Guard to ensure extra safety in terror attacks. The unit will count approximately 85,000 end of 2018. Which are largely recruited from the reserves of the army, the gendarmerie and the police.

The guard, according to the ministers Le Drian (Defence) and Cazeneuve (Interior) be seen as a complement and support the existing security forces. The Cabinet vote Wednesday on the proposal of the two ministers.

President Hollande hinted all the terrorist attacks in Paris last November on the formation of a national guard. That idea was materialized after the attack in July with the truck in Nice. Currently patrol still 10. 000 regular soldiers in the streets of French cities.