Home / World / France is a tourist from Asia 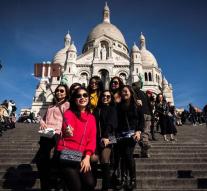 paris - France will provide visas from Russia, India and six other Asian countries, including Indonesia, within 48 hours. That's what Prime Minister Édouard Philippe said on Wednesday. The measure, intended to promote tourism, will take effect on 1 November. Now guests from those countries must have a patience for a day or ten, often in the high season.

Due to the attacks in Paris and Nice, the number of foreigners who spent the holiday in France in 2016 fell back to 83 million. This year, the tourist industry seems to be recovering and 89 million is expected. The government is targeting 100 million for 2020. The accelerated visa procedure already applies to some other countries, including Qatar, and will be expanded next year with Saudi Arabia and Vietnam as EU guidelines allow.

The French government will also appoint more customs staff to reduce waiting times at passport control at airports. For EU citizens it must be up to half an hour, for others 45 minutes. Tourism accounts for 7 percent of France's gross domestic product and employs 2 million people.