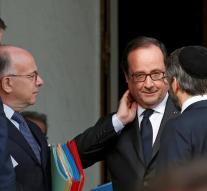 - France will establish a national guard. President Francois Hollande, who has previously launched the idea of ​​strengthening security, announced Thursday that officially.

It is not yet clear who will form the guard. It may be reservists of the army but also that of the police. Next month talking about the French security cabinet and parliament in September.

Hollande said in a speech to parliament shortly after the attacks in Paris in November already a national guard. After new attacks as Hollande will now work in Nice on July 14. The French government is due to the continuing terror under pressure from citizens who believe that too little is done to the security in the country.