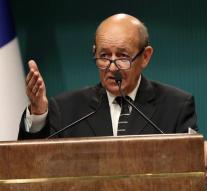 new york - France fears that the collapse of the agreement on Iran's nuclear program could result in regional arms race.

The French minister Jean-Yves Le Drian said in New York that it is 'essential' that the agreement is not deleted.

The 2015 agreement is again under the magnifying glass, criticized by US President Donald Trump. He called the agreements made under his predecessor Obama 'one of the worst deals' he had ever seen. Tehran promised to phase out its own nuclear program in return for the withdrawal of sanctions.

Allies of the United States fear that Trump intends to withdraw his country from the agreement. Le Drian said his country will try to get the American leader out of action. The governor stressed that everything indicates that the Iranians agree to the agreements.