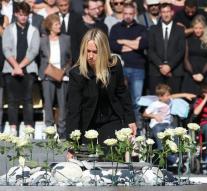 - In the presence of President Hollande is Saturday in Nice commemorated the attack on July 14. Approximately eight hundred victims' relatives were also present.

A terrorist drove on the French national holiday with a truck into pedestrians on the Promenade des Anglais in Nice. He drove 86 people dead, whose names were read out at the meeting. Hundreds of other people were injured at the hands of the 31-year-old Mohamed Lahouaiej Bouhlel. The Tunisian was shot dead by police. Islamic State later claimed responsibility for the bloody attack on.