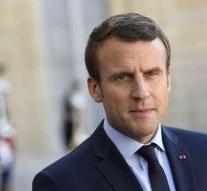 paris - France will legalize 10,000 refugees from certain countries outside Europe in the next two years. That has been promised by President Emmanuel Macron on Monday following the Élysée meeting with Filippo Grandi, the UN High Commissioner for Refugees. These are people who are still in shelter camps in Turkey, Lebanon, Jordan, Niger or Chad.

At the end of September, the European Commission presented the target in 2018 and 2019 to provide legal access to at least 50,000 refugees in order to settle in the EU. According to Brussels, this also helps to combat illegal immigration. Since July 2015, the EU countries took up approximately 24,000 people in the process of this scheme.

Government Macron wants to start selecting the most vulnerable groups who will be granted residence permits in the African countries of transit Nigeria in the coming weeks. France is thus redeeming a promise made in August during a Paris summit summit.