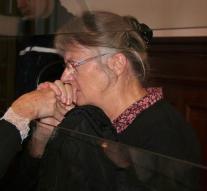 - Frenchwoman Jacqueline Sauvage, who shot her abusive husband in 2012, was convicted and then was pardoned, remains fixed for the time being anyway. That was Friday the remarkable outcome of a hearing at the court for criminal purposes in Melun, near Paris.

The judges are not with President Francois Hollande agreed Sauvage should be released, French media reported. The Public Prosecution that the woman initially precisely successfully sued, now appeals to get her still free. Otherwise she has to serve her prison sentence of ten years.

The case caused a stir in France. Jacqueline Sauvage grew into a symbol of the victims of domestic violence. She killed her husband with three bullets after a marriage that she described as a 47-year hell full of abuse and mistreatment. After pleas from mass society, decided Hollande beginning to give this year conditional pardon.


Prior to her release Sauvage had to undergo a medical and psychological examination, inter alia, to assess whether they constitute a danger. It rolled a negative opinion from a committee which included the prefect of the department and the dean of the Bar Association in sat, Le Monde reported.

A higher court will now have to address the matter.