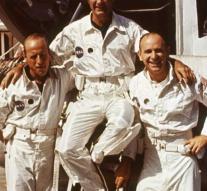 houston - Alan Bean, the fourth person ever to make a moon walk, died on Saturday at the age of 86. Space agency NASA and the Bean family reported that he died in a hospital in Houston.

Two weeks ago, Bean had unexpectedly become ill. 'Alan died peacefully in Houston surrounded by those who loved him,' his wife Leslie said in a statement.

Bean studied aeronautical engineering and became a jet fighter pilot. He made his first space trip in 1969, with the Apollo 12 to the moon. Like Charles Conrad, he then set foot on the moon.

Four years later he was the captain of the Skylab 3 mission to the American Skylab station.