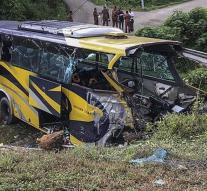 kuala lumpur - In a bus accident in Malaysia Saturday fourteen people died. That message, the New Straits Times. In the accident were seventeen people injured.

The bus was on Saturday morning (local time) have become near the Muar location on the west coast of the road and then poured down a slope. Probably the driver lost control of the vehicle.

Among the dead were a young girl and seven women. It is not excluded that there are foreigners among the victims.