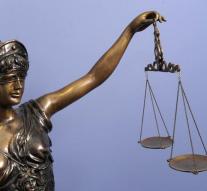 The court in Assen is guilty of killing him. That's what it used to be, even though there was a cell called for S. for six years earlier.

S. was wretched until the little rose on October 5 did not want to stop crying. The girl was not comforting and S. interrupted the child. Half an hour later, she discovered that Roos was unconscious. In the UMCG, the child died of severe brain injury two days later.