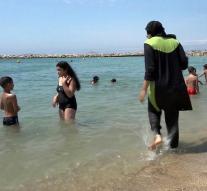 cannes - In Cannes, France have been fined four swimmers who had ventured into a BURQINI on the beach. The body-covering swimwear carrying some devout Muslim women is forbidden since Friday in the fashionable seaside resort.

Last weekend were punished immediately two young women, local newspaper Nice-Matin wrote Tuesday. Also Monday informed the police on the beach a penalty, this time on a 57-year-old Tunisian. Tuesday was the spot for the fourth time.

The mayor of Cannes decided that beachgoers, now the state of emergency because of the threat of Muslim extremism, no swimsuits allowed to wear,, reflecting a religious belief. ' According to police officers patrolling get much assenting comments bathers.


The fine for wearing swimwear too much conceals amounts to a few bucks.