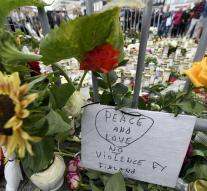 turku - The Finnish police arrested four Moroccan men who were possibly involved in the stabbing party in Turku.

An eighteen-year-old Moroccan has been stuck for a long time. He died two passersby on Friday and injured eight people. According to the police, he had specifically targeted women.

The man arrived in Finland last year. He claimed asylum, according to Finnish media, but he was refused. The police do not want to comment on this, but finds that the man was part of the asylum process. '

The sting in Turku is considered to be murder for terrorist purposes. One victim died on the spot, the other in the hospital. The police shot the perpetrator in his leg.

The security in the country has been strengthened with more patrols and surveillance. Flags were sailing throughout Finland, where violent crimes are relatively rare, half-sticks.