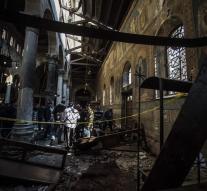 - The Egyptian authorities have arrested four people after a bomb explosion in a Coptic church in the capital Cairo. Two other suspects are still on the run, said Egyptian President Abdel Fattah al-Sisi at the state funeral for the victims.

The church came Sunday 24 people were killed when an explosive device detonated. According Sisi this was a suicide attack carried out by a 22-year-old man. The security forces have now three men and arrested a woman according to the president. It is still unclear what role they might have played.

The president called for stricter legislation to prevent new attacks.