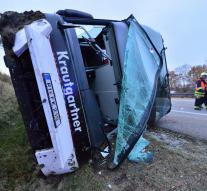 Aboard the coach were 59 children and some adults. They came back from a trip to England. The school of Annaberg- Buchholz in the German state of Saxony who organized the trip, said that the dead boy was the son of a teacher. The Saturday school is open to students, parents and staff.

The coach probably hit the road when overtaking, and the vehicle overturned.