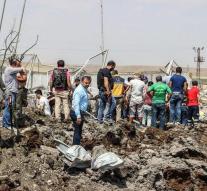 diyarbakir - At the airport in the Turkish city of Diyarbakir Saturday fired four missiles. When the rocket attack on the airport in southeastern Turkey, no injuries, reports the governor of the province on the NTV channel. The attack was probably carried out by Kurdish rebels.

The missiles were fired at a police post next to the VIP lounge of the airport. Passengers and airport personnel were brought to safety in the airport terminal. According to NTV beat the rockets on an undeveloped piece of land away.

Diyarbakir is the largest city in the mainly Kurdish-populated southeast of Turkey. The attack follows the actions of the Turkish army that Syria is invaded for IS and to fight the advancing Kurdish militias in the border area.