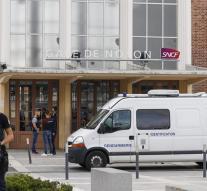 noyon - Two adults and two children were shot at Noyon train station in northern France. A mother with two children aged 3 and 5 was escorted by a friend to leave the city when they were taken by two shooters and found death.

According to French media, one of the shooters committed suicide. He would be the partner or ex-partner of the woman, making it possible for a family drama. The second is volatile. The police started a hunt.

Noyon is located in the department of Oise, northeast of Paris.