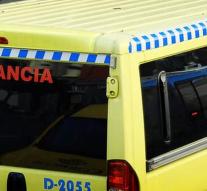 - Four members of a German family on the Spanish island of Mallorca killed by a car accident. It is about the father, mother and two daughters aged seven and ten years.

Tuesday's identity was known to the victims of the accident Monday afternoon. The family is according to German media in the village Freising near Munich in Bavaria.

The victims died when the car in which they were sitting in front collided with a small truck. That happened in a northeast of the holiday island. The truck driver was only minor injuries.