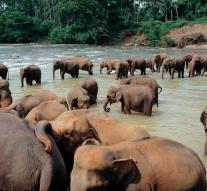 colombo - A collision with a train in Sri Lanka has four elephants, including a calf, Wednesday killed. The New Indian Express newspaper reported that the incident took place in the northern district of Vavuniya.

Sri Lanka has banned the killing of elephants. Yet come annually hundred to one hundred elephants killed. Sometimes by accident, but it is not uncommon for farmers vergitigen or shoot the animals. Elephants sometimes eat crops or trampling the fields with crops of farmers.