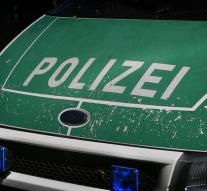 - A right-wing extremist on Wednesday in Georgensgmünd shot at Nuremberg four policemen. Police in Bavaria tried to take the weapon from the man, when the 49-year-old German opened fire. The man was finally arrested.

The man, according to a German media empire Burger. Reichsbürgers are people who do not recognize the Federal Republic of Germany. They go out of the German Empire and its borders of 1937, when Hitler was in power. They reject democracy and often deny the Holocaust. The government estimates the number of these right-wing extremists a few hundred.