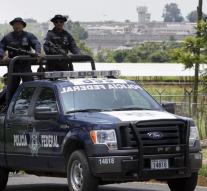 - In the west of Mexico is the founder and former drug lord of La Familia Michoacana murdered. That is one of the most powerful drug cartels in the country.

The body of Carlo Rosales Mendoza, also known as El Tísico, was found along with three other bodies along the highway in the state of Michoacán. According to the Prosecution, there are gunshot wounds and signs of abuse detected.

Rosales Mendoza founded the first cells of the criminal organization in the eighties. He was a good friend of Osiel Cárdnes Guillen, former leader of the notorious Gulf Cartel in Mexico. For organized crime and drug trafficking Mendoza had been a prison sentence of ten years in jail. Nothing is known about the circumstances of the murder.