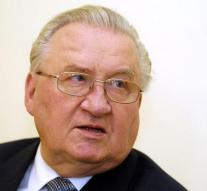 - The former president of Slovakia Michal Kovac Wednesday in Bratislava deceased at the age of 86. He is considered the founder of the independent Slovakia, which broke away from the Czech Republic in January 1993.

Kovac was from 1993 to 1998, the first president of the country. He was an economist and worked in the sixties in the banking world, including in Cuba and London. He was one of the driving forces behind the detachment of the Czech Republic. As president, he is seen as the man of the Slovak Republic made a stable and democratic nation. Moreover, he is one of the pioneers of Slovakia's passage to the European Union and NATO in 2004.

He tried to become president again in 1999, but lost the election. Since then, he withdrew from active politics.