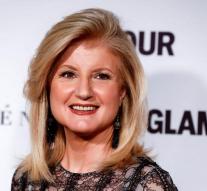 - Arianna Huffington, co-founder and namesake of the famous American news website The Huffington Post stops as editor of the site. They will focus entirely on Thrive Global, its startup in the field of health and wellness.

In June, extended the 66-year-old Huffington her contract with the site until 2019, when in the expectation that they could lead both companies. Investors, however, had massive interest Thrive Global, which she now realizes not combine both jobs, according to The Wall Street Journal.

The progressive liberal news website was set up in May 2005 by Arianna Huffington and Kenneth Lerer.